In a recent pentesting assignment, there was a service which converted uploaded files to PDF/A format, to make them safer for handling. After all, they were uploaded to the service by external users. The service only allowed Excel (.xls & .xlsx), Word (.doc & .docx) and PDF -files. Eventually I ended up trying to upload a PostScript-file with the extension .pdf. After all, pdf and PostScript formats are similar. You should know, that many PostScript interpreters won't allow file I/O, but still as I found out: it's a chance!

The exploiting was simple: I was able to upload the postscript files to the server, which then proceeded to convert the file to PDF or PDF/A. With one of the services I had to just rename the PostScript file so it had .pdf extension. Then the services gave me access to the converted files, which had the loot within them...

I have also witnessed this vulnerability on the Internet in publicly available services and notified them. I tried to find possible targets (file conversion services) with Google and tested about 10 of the first hits in the results. 3 of the targets were vulnerable but by the request of the vulnerable parties, whose services are now fixed, I won't be disclosing them publicly.

After uploading the file with a pdf extension, the service converted it automatically and the resulting PDF looked like the following: 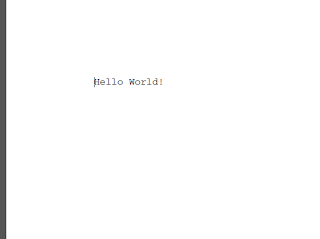 The PostScript code was executed!

After googling a bit, I found a copy of a book called "Thinking in PostScript". It's pretty old, but it seems to still be accurate. After skimming through it, I was able to write 2 pieces of PostScript code, of which 1 significantly helped me in my assignment:


Because I didn't find anything online that would accomplish the same, I thought that I would share my scripts, so here goes:

You can naturally replace input.txt with any file and path you desire. You just need to escape backslashes (\) and parentheses (both ( and )) with a backslash. For example to read the hosts file on a windows, you'd replace "input.txt" with "C:\\Windows\\System32\\drivers\\etc\\hosts".

However there are limitations. For example, the script doesn't handle pagination, and if the contents don't fit on one page, only partial results are rendered. However the pdf still contains all the text, you just need some tools to dig it out. One such a tool is pdf2txt from the pdfminer toolkit. Additionally readline doesn't include linefeed nor carriage return characters in the buffer, so I'd recommend the following script instead (for larger and/or binary files):

If you read a file with the above script and try to extract the contents with pdf2txt, all the binary bytes are replaced with (sid:xx) where xx is a decimal representation of the character. For example a newline (0x0a) would be replaced with (sid:10), but they should be fairly simple to convert back to their binary form.

Again you should be good if you just escape any backslashes and parentheses with backslashes in your file contents.

If writing files with PostScript is allowed, you can easily see why allowing external users to create files is bad, when you consider the possibility to create a php, asp or any other backdoor on the target.

If you want to test out the above scripts yourself, you can use for example the ps2pdf from the ghostscript-package. With it you see, that the file I/O is by default forbidden and you should get a verbose error starting with "Error: /invalidfileaccess in --file--". 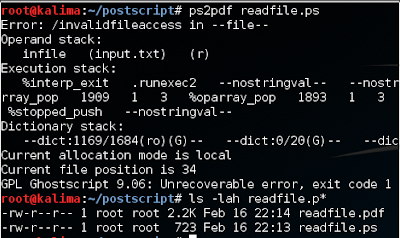 Running the PostScript code without the -DNOSAFER argument

To bypass this and actually execute the script to see how they operate, you can use the -DNOSAFER parameter:

Running the PostScript code with the -DNOSAFER argument